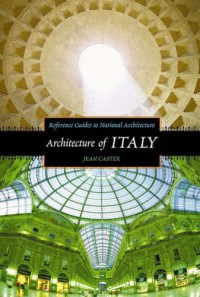 Covering all regions of Italy–from Turin’s Palace of Labor in northern Italy to the Monreale Cathedral and Cloister in Sicily–and all periods of Italian architecture–from the first-century Colosseum in Rome to the Casa Rustica apartments built in Milan in the 1930s–this volume examines over 70 of Italy’s most important architectural landmarks. Writing in an authoritative yet engaging style, Jean Castex, professor of architectural history at the Versailles School of Architecture, describes the features, functions, and historical importance of each structure. Besides idetifying location, style, architects, and periods of initial construction and major renovations, the cross-referenced and illustrated entries also highlight architectural and historical terms explained in the Glossay and conclude with a useful listing of further information resources. The volume also offers ready-reference lists of entries by location, architectural style, and time period, as well as a general bibliography, a detailed subject index, and a comprehensive introductory overview of Italian architecture. Entries cover major architectural structures as well as smaller sites, including everything from the well-known dome of St. Peter’s at the Vatican to the Fiat Lingotto Plant in Turin. Other entries include the following: BLAugustus Gate, Perugia BLCastel del Monte, Puglia BLDucal Palace, Urbino BLHouse of the Faun, Pompeii BLLaurentian Library, Florence BLPiazza Pio II, Pienza BLRenovation of the Old Harbor, Genoa BLTrevi Fountain, Rome BLVilla Malaparte, Capri Ideal for college and high school students, as well as for interested general readers, this comprehensive look at the architecture of Italy is an indispensable addition to every architectural reference collection. About the AuthorJEAN CASTEX is an architect and professor of architectural history at the Versailles School of Architecture, where he has served as president of the faculty. Professor Castex graduated from the Ecole des Beaux-Arts in 1968 and was awarded a doctorate from Paris VIII University in 1997 with a thesis on the seventeenth-century French architect Francois Mansart. He has published several books and articles on urban studies, including Urban Forms, the Death and Life of the Urban Block (1977), which he authored with Ph. Panerai and J. Ch. Depaule. His 1989 book on architecture of the fifteenth through the nineteenth centuries, Renaissance, Baroque, Classicisme, 1420-1720, was re-edited in 2004 and has been translated into Dutch and Spanish.