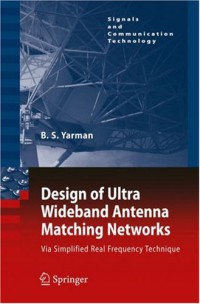 Design of Ultra Wideband Antenna Matching Networks: via Simplified Real Frequency Technique (SRFT) will open up a new horizon for design engineers, researchers, undergraduate and graduate students to construct multi-band and ultra wideband antenna matching networks for antennas which in turn will push the edge of technology to manufacture new generation of complex communication systems beyond microwave frequencies both in commercial and military line.
In Design of Ultra Wideband Antenna Matching Networks, many real life examples are presented to design antenna matching networks over HF and cellular commercial multi-band frequencies. For each example, open MatLab source codes are provided so that the reader can easily generate and verify the results of the examples included in the book.
About the Author
Professor Yarman is currently visiting Professor at Tokyo Institute of Technology. He received his B.Sc. in Electrical Engineering from Technical University of Istanbul (Feb. 1974), M.Sc. degree from Stevens Institute of Technology, NJ, USA (1978), Ph.D. degree from Cornell University, Ithaca, NY, USA (1982). He had been Member of Technical Staff at RCA-David Sarnoff Research Center, Princeton, NJ, where he was in charge of designing various satellite transponders for various commercial and military agencies in the US such as Air Force, Hughes Aircraft’s, Bell Labs, Comsat, Intelsat, American Satcom of RCA etc. He returned to Turkey in 1984 and served as Assistant, Associate and full Professor at Anatolia University-Eskisehir, Middle East Technical University-Ankara, Technical University of Istanbul, and Istanbul University, Istanbul. He had been the chairperson of Department of Electronics Engineering, Defense Technologies and Director of School of Technical Sciences of Istanbul University over the years 1990-1996.
He was one of the founders of I-ERDEC Maryland USA (1983), STFA SAVRONIK; a Defense Electronics company in Turkey (1986) and ARES Security Systems Inc. (1990). He had been a visiting professor at Ruhr University, Bochum, Germany over the years 1987-1994. He had been a technical consultant to Turkish General Staff, Turkish Air Force and Turkish Military Industries over the years 1984-1987. He had been the Chief Technical Adviser to Turkish Prime Ministry Office and Director of Electronic and Technical Intelligent Agency of Turkey (1993-1999).
In 1996-2004, he had served as the founding President Isik University, Istanbul, Turkey. Upon completion his duty as the president, he has returned to Istanbul University. In the year 2006-2007 he is spending his sabbatical at Tokyo Institute of Technology, Tokyo, Japan.
Dr. Yarman published more than 100 scientific and technical papers in the field of Electrical/Electronic Engineering, Microwave Engineering, Computer Engineering, Mathematics and Management. He holds four US patents assigned to US Air Force. He has served in various technical and scientific committees since 1980 in the USA, and Turkey. He received the Young Turkish Scientist Award in 1986, the Technology Award in 1987 of National Research and Technology Counsel of Turkey. He received the Research Fellowship award of Alexander Von Humboldt Foundation, Bonn, Germany, in 1987. He became the Member of New York Academy of Science in1994. He was named as the "Man of the year in Science and Technology" in 1998 of Cambridge Biography Center, UK and elevated to IEEE Fellow for his contribution to "Computer Aided design of Broadband Amplifiers". Prof. Siddik Yarman is married with Sema Yarman (Prof. Dr. MD, Dept. of Internal Medicine, Div. of Endocrinology, Medical School of Istanbul University) with one son Evren Yarman (US citizen, Ph.D Student in ECE, Rensselaer Polytechnic Institute, Troy, NY, USA).