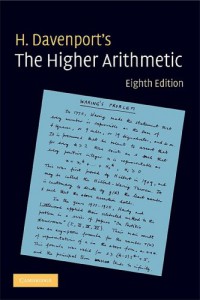 Book: The Higher Arithmetic: An Introduction to the Theory of Numbers

‘Although this book is not written as a textbook but rather as a work for the general reader, it could certainly be used as a textbook for an undergraduate course in number theory and, in the reviewer’s opinion, is far superior for this purpose to any other book in English.’ From a review of the first edition in Bulletin of the American Mathematical Society ‘… the well-known and charming introduction to number theory … can be recommended both for independent study and as a reference text for a general mathematical audience.’ European Maths Society Journal Now into its Eighth edition, The Higher Arithmetic introduces the classic concepts and theorems of number theory in a way that does not require the reader to have an in-depth knowledge of the theory of numbers The theory of numbers is considered to be the purest branch of pure mathematics and is also one of the most highly active and engaging areas of mathematics today. Since earlier editions, additional material written by J. H. Davenport has been added, on topics such as Wiles’ proof of Fermat’s Last Theorem, computers & number theory, and primality testing. Written to be accessible to the general reader, this classic book is also ideal for undergraduate courses on number theory, and covers all the necessary material clearly and succinctly. About the Author Harold Davenport F.R.S. was the late Rouse Ball Professor of Mathematics at the University of Cambridge and Fellow of Trinity College.