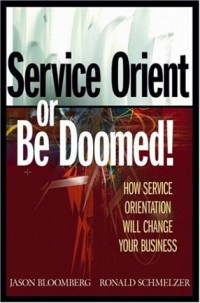 Introducing service orientation as a vision and philosophy that can impact a business, this innovative new book equips the reader to:

Best use technology resources to meet goals
Unleash their "inner nerd" to embrace IT as part of their business as a whole
Address the "mother of all business problems": inflexibility
Know the technological factors that pressure a business to innovate
Understand buzzwords with Jargon Watch sidebars

Conversational in style and alternately irreverent, humorous, and intelligent in tone, authors Jason Bloomberg and Ronald Schmelzer—senior analysts for highly respected IT advisory and analysis firm ZapThink—offer a magna carta to CEO and small business owner alike that erases the line between business and technology toward a new service-oriented approach.
About the Author
Jason Bloomberg (Uxbridge, MA), ZapThink senior analyst, has a diverse background in eBusiness technology management and industry analysis, including serving as a senior analyst in IDC’s eBusiness Advisory group, as well as holding eBusiness management positions at USWeb/CKS (later marchFIRST) and WaveBend Solutions (now Hitachi Consulting). He has a bachelor’s degree in physics from Pomona College, and Masters degrees in mathematics and history & philosophy of science from the University of Pittsburgh.
Ronald Schmelzer (Waltham, MA), ZapThink senior analyst and founder, is a well-known expert in the field of XML and XML-based standards and initiatives. He has been featured in and written for periodicals, and has spoken at numerous industry conferences including XML One, Comdex, and Internet World on the topic of XML. Schmelzer has served as the chair of the RosettaNet Cluster 1 Workgroup, working group member of CPExchange, member of the UDDI advisory group, and was a member of the CompTIA Electronic Commerce Standards Board (ECSB). He was named "Geek of the Week" in Internet Magazine and was listed in Boston Magazine’s Internet Top 40. Schmelzer received a B.S. degree in Computer Science and Engineering from the Massachusetts Institute of Technology (MIT).