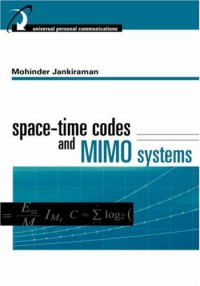 This book is intended to introduce space-time coding and multiantenna systems. The endeavor is to impart a working knowledge of the subject not just for students and researchers but for the entire wireless community.The birth of multiantenna systems is the direct result of the long-standing struggle to achieve data rates without compromising the quality of the reception. Indeed this has been the case since the inception of wireless communications. A binding constraint in the evolution of high data rate systems is the stringent limitation imposed on the available spectrum. This, in turn, has given rise to more efficient signaling techniques. Recent study has shown that multiple antennas yield substantial increases in channel capacity. Toward this end, multiple-input multipleoutput (MIMO) systems have been constructed comprising multiple antenna arrays at both ends of the wireless link. Space-time coding, as the name suggests, involves coding across space and time and is aimed at approaching the capacity limits of MIMO channels. Today space-time coding and MIMO systems are widely regarded as the most likely candidates for futuristic high data rate systems and are already being designed by many companies for the high data rate market.This book is intended for postgraduate students, practicing engineers, and researchers. It is assumed that the reader is familiar with basic digital communications, linear algebra, and probability theory.In view of the fact that space-time coding theory has become such a widely discussed and researched topic in recent times, it is not possible to cover all aspects in any detail. Therefore, an effort has been made to impart to the reader a ‘‘flavor’’ of the subject just enough to whet his/her appetite, prompting further detailed study of areas of particular interest. Toward this end, the style of writing has been kept as simple as possible and technical cliche´s and jargon have been kept to a minimum. All effort has been made to explain the basics in a cogent and conversational manner.
About the Author
Mohinder Jankiraman is a Dallas, Texas-based technology consultant with more than 20 years of professional engineering experience in wireless communications. A senior member of the IEEE and former researcher at The Netherlands’ Delft University of Technology, he recently taught at the University of Aalborg in Denmark and was a senior engineer at Summitek Instruments, Inc. of Denver, Colorado. He holds a Ph.D. in wireless multimedia communications from the University of Aalborg, and an M.S. in technology design from Delft University of Technology.