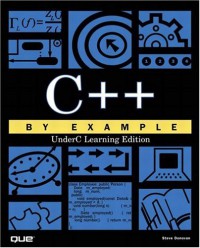 C++ by Example includes ‘UnderC,’ an open-source language interpreter developed by the author, which shows the result of each new programming technique instantly, allowing novices to experiment in a more dynamic learning environment. The book starts with the fundamentals of the language, including expressions, variables, functions, and definitions and then covers the most common C++ features including
Organizing data with Arrays
Standard Algorithms and Containers
Using Libraries within C++ programs
Going beyond Arrays with Structures
Using Pointers
Manipulating data using Operators
The second half of the book covers OOP, including Classes, Inheritance, Encapsulation, and more. The final chapters include useful command and library references and appendices covering the preprocessor and freeware C++ compilers.
About the Author
Steve Donovan has been programming most of his life, mostly scientific and engineering applications. He did graduate work in nuclear physics and taught college physics for three years, which taught him the importance of language in learning science.
He has been with the Mining Research labs of CSIR South Africa for the past 10 years, primarily working with geophysical and geotechnical applications in Windows, in everything from Pascal to Assembler. C++ has been his tool of choice for five years, and he tries not to argue with Java and Visual Basic programmers.
Steve has developed the UnderC C++ interpreter to make life easier both for beginners and for experts who are tired of the compile-link-go cycle. Steve has released UnderC as open source, in the hope that someone else will debug it. He is not considered a gifted drawer of icons.