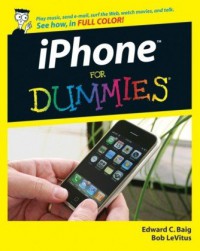 Play podcasts, music, videos, and photo slideshows
Customize your iPhone, fill it with cool stuff, even use it to manage your life
With Apple’s iPhone, you have the world virtually in your pocket. But because it does so much, there’s much to know about using it! This full-color guide shows you how to keep on top of your appointments, check the local weather, get driving directions and stock quotes, send and receive e-mail and text messages, take photos — even talk on the phone.

Find a person, place, or thing with Maps

About the Author Edward C. Baig writes the weekly Personal Technology column in USA TODAY and is co-host of the weekly USA TODAY’s Talking Tech podcast. He is also the author of Macs For Dummies, 9th Edition, for Wiley Publishing. Before joining USA TODAY as a columnist in 1999, Ed spent six years at Business Week, where he wrote and edited stories about consumer tech, personal finance, collectibles, and travel, among other topics. He received the Medill School of Journalism 1999 Financial Writers and Editors Award for contributions to the “Business Week Investor Guide to Online Investing.” That followed a three-year stint at U.S. News & World Report, where Ed was the lead tech writer for the News You Can Use section but also dabbled in other subjects. He recalls fondly putting together features on baseball card investing, karaoke machines, and the odd things people collect, including Pez dispensers, vintage radios, and magic memorabilia. Ed began his journalist career at Fortune magazine, gaining the best basic training imaginable during his early years as a fact checker. Through the dozen years he worked at the magazine, Ed covered leisure-time industries, penned features on the lucrative dating market and the effect of religion on corporate managers, and also started up Fortune’s Products to Watch column.
Bob LeVitus, often referred to as “Dr. Mac,” has written or co-written 50 popular computer books, including Dr. Mac: The OS X Files and Mac OS X Leopard For Dummies for Wiley Publishing; Stupid Mac Tricks and Dr. Macintosh for Addison-Wesley; and The Little iTunes Book, 3rd Edition and The Little iDVD Book, 2nd Edition for Peachpit Press. His books have sold more than a million copies worldwide. Bob has penned the popular Dr. Mac column for the Houston Chronicle for the past ten years and has been published in dozens of computer magazines over the past fifteen years. His achievements have been documented in major media around the world. (Yes, that was Bob juggling a keyboard in USA Today a few years back!) Bob is considered one of the world’s leading authorities on Mac OS. From 1989 to 1997, he was a contributing editor and columnist for MacUser magazine, writing the Help Folder, Beating the System, Personal Best, and Game Room columns at various times. In his copious spare time, Bob heads up a team of expert technical consultants who do nothing but provide technical help and training to Mac users via telephone, e-mail, and Internet-enabled remote control software, which allows them to see and control your Mac no matter where in the world you may be. If you’re having problems with your Mac, you ought to give them a try.