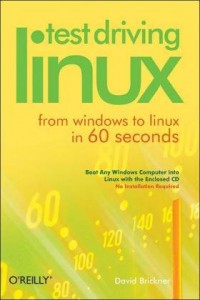 Book: Test Driving Linux: From Windows to Linux in 60 Seconds

For years, computer users have put up with the bugs, security holes, and viruses on Windows because they had no choice. Until recently, there has never been a good alternative to Windows. But now, Windows users can switch to Linux, the reliable, secure, and spyware free operating system. Linux is easy to use, runs on almost any PC, and enables you to perform all the tasks you can do with Windows. Getting to know Linux has never been easier, because now there’s a way to test-drive Linux without changing, installing, or configuring a thing on your computer. It’s called Test Driving Linux: From Windows to Linux in 60 Seconds. This latest release from O’Reilly comes with a Live CD called Move, that allows Windows users to try all the features of Mandrake Linux, a popular Linux distribution without the hassle of actually installing Linux. Users simply place the Move CD into their CD drive, boot from the disc, then watch an entire Mandrake system run on the fly from the CD-ROM. Test Driving Linux: From Windows to Linux in 60 Seconds is a detailed step-by-step guide to the Linux operating system and several popular open source programs. With this guide you can quickly learn how to use Linux to perform the tasks you do most: surf the web, send and receive email, instant message with friends, write letters, create spreadsheets, and even how to enhance your digital photos. Test Driving Linux: From Windows to Linux in 60 Seconds provides both home and business users with a hassle-free way to investigate this operating system before they purchase and install a complete Linux distribution. About the AuthorDavid Brickner is an editor of Linux and Open Source books at O’Reilly Media, Inc. Prior to that he worked as a Windows system administrator for eight years. He has used Linux servers since 1998, and run it as his full-time desktop for the past four years. David lives close to Boston, MA with his wife Claire and two well-behaved cats. He enjoys reading Fantasy and Science-Fiction books, eating his own pumpkin bread, and going to the movies with Claire. David wishes his hobbies were woodworking and camping, but he hasn’t done enough of either for this to be true. David did not vote for Bush in any election.