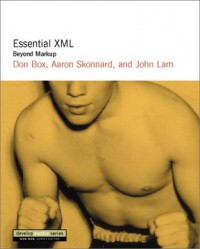 The Extensible Markup Language (XML) has been anointed as the universal duct tape for all software integration problems despite XML’s relatively humble origins in the world of document management systems. Essential XML presents a software engineering-focused view of XML and investigates how XML can be used as a component integration technology much like COM or CORBA. Written for software developers and technical managers, this book demonstrates how XML can be used as the glue between independently developed software components (or in the marketecture terminology du jour, how XML can act as the backplane for B2B e-commerce applications).
Authors Don Box, Aaron Skonnard, and John Lam cover the key issues, technologies, and techniques involved in using XML as the adhesive between disparate software components and environments. They explain the fundamental abstractions and concepts that permeate all XML technologies, primarily those documented in the XML Information Set (Infoset). XML-based approaches to metadata, declarative, and procedural programming through transformation and programmatic interfaces are covered. Don Box, co-author of the Simple Object Access Protocol (SOAP) specification, provides readers with insight into this emerging XML messaging technology for bridging COM, CORBA, EJB, and the Web.
Readers acquire a better understanding of XML’s inner workings and come to see how its platform, language, and vendor independence–along with its accessibility–make it an extraordinarily effective solution for software interoperation.
About the Author
Don Box is a leading educator, recognized authority on the Component Object Model (COM), coauthor of the Simple Object Access Protocol (SOAP) specification, and coiner of the term "COM is Love." He recently joined Microsoft as an architect in the Microsoft® .NET Developer and Platform Evangelism Group.
Earlier in his career, Box cofounded DevelopMentor Inc., a component software think tank aimed at educating developers on the use of the COM, Java, and XML. A popular public speaker, Box is known for engaging audiences around the world, combining deep technical insight with often outrageous stunts.
Aaron Skonnard is a member of the technical staff at DevelopMentor and a contributing editor to MSDN Magazine, where he writes "The XML Files" column.
John Lam is a member of the technical staff at DevelopMentor and a contributor to PC and MSDN magazines.