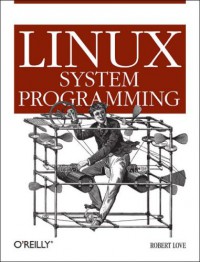 This book is about writing software that makes the most effective use of the system you’re running on — code that interfaces directly with the kernel and core system libraries, including the shell, text editor, compiler, debugger, core utilities, and system daemons. The majority of both Unix and Linux code is still written at the system level, and Linux System Programming focuses on everything above the kernel, where applications such as Apache, bash, cp, vim, Emacs, gcc, gdb, glibc, ls, mv, and X exist. Written primarily for engineers looking to program (better) at the low level, this book is an ideal teaching tool for any programmer. Even with the trend toward high-level development, either through web software (such as PHP) or managed code (C#), someone still has to write the PHP interpreter and the C# virtual machine. Linux System Programming gives you an understanding of core internals that makes for better code, no matter where it appears in the stack. Debugging high-level code often requires you to understand the system calls and kernel behavior of your operating system, too. Key topics include:

An overview of Linux, the kernel, the C library, and the C compiler
Reading from and writing to files, along with other basic file I/O operations, including how the Linux kernel implements and manages file I/O
Buffer size management, including the Standard I/O library
Advanced I/O interfaces, memory mappings, and optimization techniques
The family of system calls for basic process management
Advanced process management, including real-time processes
File and directories-creating, moving, copying, deleting, and managing them
Memory management — interfaces for allocating memory, managing the memory you have, and optimizing your memory access
Signals and their role on a Unix system, plus basic and advanced signal interfaces
Time, sleeping, and clock management, starting with the basics and continuing through POSIX clocks and high resolution timers

With Linux System Programming, you will be able to take an in-depth look at Linux from both a theoretical and an applied perspective as you cover a wide range of programming topics. About the AuthorRobert Love has been a Linux user and hacker since the early days. He is active in, and passionate about, both the Linux kernel and GNOME desktop communities. His recent contributions to the Linux kernel include work on the kernel event layer and inotify. GNOME-related contributions include Beagle, GNOME Volume Manager, NetworkManager, and Project Utopia. Currently Robert works in the Open Source Program Office at Google. As an author, Robert is responsible for Linux Kernel Development (SAMS), now in its second edition, and Linux System Programming (O’Reilly). He is also a coauthor of the fifth edition of O’Reilly’s Linux in a Nutshell. He’s a Contributing Editor for Linux Journal, has written numerous articles, and has been invited to speak around the world on Linux. Robert graduated from the University of Florida with a B.A. in Mathematics and a B.S. in Computer Science. Hailing from South Florida, he currently calls Boston home.