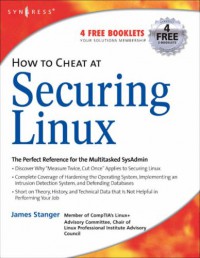 Book: How to Cheat at Securing Linux

Linux servers now account for 33% of all networks servers running worldwide (Source: IDC). The top 3 market share holders in the network server space (IBM, Hewlett-Packard, and Dell) all use Linux as their standard operating system for the majority of their servers designed for medium to large size businesses. As with any technologies, increased usage results in increased attention from malicious hackers. For years a myth existed that Windows was inherently less secure than Linux, because there were significantly more attacks against Windows machines than Linux. But this was a fallacy. There were more attacks against Windows machines because there were simply so many more Windows machines to attack. Now, the numbers tell the exact OPPOSITE story. Linux servers account for 1/3 of all servers worldwide, but in 2005 there were 3 times as many high-severity security vulnerabilities discovered on Linux servers. 2005: Linux Server market share 24% (Source: IDC)2005: Number of published Linux Security books: 252005-2007: Linux Server market share increases to 33% (Source: IDC)2005-2007: Number of new books published on Linux Security: 0The Perfect Reference for the Multitasked SysAdmin* Discover Why "Measure Twice, Cut Once" Applies to Securing Linux* Complete Coverage of Hardening the Operating System, Implementing an Intrusion Detection System, and Defending Databases* Short on Theory, History, and Technical Data that Is Not Helpful in Performing Your Job About the AuthorDr. James Stanger leads Prosoft’s broad activities in certification as well as the company’s well-respected product development capabilities. Dr. Stanger joined the company in 1997. Following many years as a key leader in the company’s product development area, he was named Director of the group in May 2003. He was promoted to Vice President, Certification and Product Development in December 2003. Dr. Stanger is very active in the certification community. He has helped develop certifications for Symantec, the Linux Professional Institute (LPI), CompTIA, and the Telecommunications Industry Association (TIA). He is currently Chair of the LPI Advisory Council and sits on the CompTIA Network+ and Linux+ cornerstone committees.Dr. Stanger is a prolific author. A sample of the titles he has either written or contributed to include The Windows to Linux Migration Toolkit (Syngress), Security+ (ComputerPREP), Hack Proofing Linux (Syngress), The E-mail Virus Protection Handbook (Syngress), and The CIW Security Professional Study Guide (Sybex).An accomplished networking consultant, Dr. Stanger has advised customers such as Symantec, the TIA, Securify, Fuelzone.com, and IBM concerning Internet security, convergence technology, and Windows to Linux migration. Prior to joining Prosoft, Dr. Stanger was an educator and consultant, holding teaching positions at the University of California at Riverside, the University of Redlands, and Crafton Hills College. Dr. Stanger earned a B.A. and a Masters degree from Brigham Young University and a Ph.D. from the University of California at Riverside. He is a CIW Master Administrator, and also holds the Linux+, Security+, A+, and Convergence Technologies Professional (CTP) certifications.