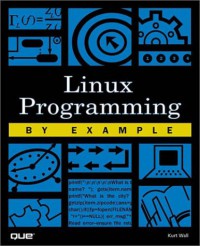 Discusses how LINUX works at the system level by learning how and when to manipulate processes, send and catch signals, and use calls, and how to manipulate and read pipes and FIFOs. Softcover. Linux Programming By Example introduces programmers with some background in C but no knowledge of the specifics of Linux programming to the fundamentals of Linux system programming and application development. Topics covered include using GNU development tools, system programming, file handling in Linux, interprocess communication, network programming, application programming interfaces, debugging and memory management, and version control and software distribution. About the AuthorKurt Wall has been using UNIX since 1993 and has been hooked on Linux for nearly as long. He currently maintains the Informix on Linux FAQ and is President of the International Informix Users Group’s Linux Special Interest Group. He is Vice President of the Salt Lake Linux Users Group, where he recently gave a presentation on Linux and databases. Formerly employed with US West, Kurt now writes and edits full time. He recently completed his first book, Linux Programming Unleashed.