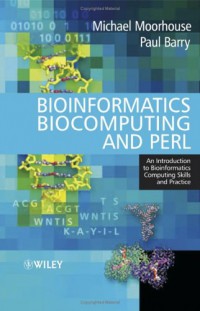 Bioinformatics, Biocomputing and Perl presents an extended tutorial introduction to programming through Perl, the premier programming technology of the bioinformatics community. Even though no previous programming experience is assumed, completing the tutorial equips the reader with the ability to produce powerful custom programs with ease.
Working with Data applies the programming skills acquired to processing a variety of bioinformatics data. In addition to advice on working with important data stores such as the Protein DataBank, SWISS-PROT, EMBL and the GenBank, considerable discussion is devoted to using bioinformatics data to populate relational database systems. The popular MySQL database is used in all examples.
Working with the Web presents a discussion of the Web-based technologies that allow the bioinformatics researcher to publish both data and applications on the Internet.
Working with Applications shifts gear from creating custom programs to using them. The tools described include Clustal-W, EMBOSS, STRIDE, BLAST and Xmgrace. An introduction to the important Bioperl Project concludes this chapter and rounds off the book.
Each chapter contains a series of maxims designed to highlight key points and there are exercises to supplement and cement the introduced material. Source code, related links, errata and presentation materials are provided at glasnost.itcarlow.ie/~biobook/index.html (in PowerPoint format). About the Author
Michael Moorhouse works as a Bioinformatics Researcher for Erasmus MC in Rotterdam, The Netherlands. He holds a B.Sc. from UMIST and an M.Sc. from The University of Manchester. Michael recently completed a Ph.D. from The University of Birmingham in the UK. He has been involved in numerous bioinformatics courses throughout the UK and Netherlands. This is Michael’s first book.
Paul Barry works as a Lecturer in Computing Science at The Institute of Technology, Carlow in Ireland. He holds a B.Sc. from The University of Ulster in Jordanstown, Northern Ireland and recently completed an M.Sc. from The Institute of Technology, Sligo in Ireland. He is the author of Programming the Network with Perl (Wiley, 2002).