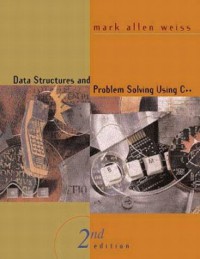 Promotes abstract thinking by separating the interface and implementation of the data structures into different parts of the book
All code is completely rewritten and tested for compatibility with a wide range of current compilers
Revised material makes use of the STL whenever appropriate
Rewritten material on inheritance simplifies the initial presentation and provides the C++ details that are important for advanced uses
Includes a new chapter on Patterns
Provides new material on templates, vectors, and push_back
Illustrates both the generic interfaces and STL interfaces of data structures
Generic data structures such as linked lists classes, search tree and hash table classes, priority_queue, and disjoint sets class are rewritten to be much simpler and cleaner
A simplified STL implementation is illustrated at the end of the chapters in Part IV, including vector, list, stack, queue, set, map, and priority_queue

About the AuthorMark Allen Weiss is a Professor in the School of Computer Science at Florida International University. He received his Ph.D. in Computer Science from Princeton University where he studied under Robert Sedgewick. Dr.Weiss has received FIU’s Excellence in Research Award, as well as the Teaching Incentive Program Award, which was established by the Florida Legislature to recognize teaching excellence. Mark Allen Weiss is on the Advanced Placement Computer Science Development Committee. He is the successful author of Algorithms, Data Structures, and Problem Solving with C++ and the series Data Structures and Algorithm Analysis in Pascal, Ada, C, and C++, with Addison-Wesley.