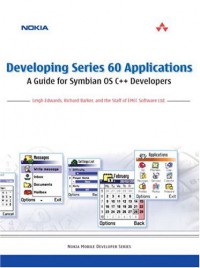 About the Author
LEIGH EDWARDS is the author of Programming Psion Computers and has been working with Symbian OS for more than six years, since the days of EPOC32 and Psion Software. He is a co-founder of EMCC Software Ltd., a Symbian and Series 60 Competence Center.
RICHARD BARKER has been developing in C++ for ten years, with a background in R&D, artificial intelligence, and real-time training simulators for defense systems. He has been with EMCC Software as a Symbian OS and Series 60 developer for three years, working on interface and engine design, client software to deliver dynamic data services, and development of Symbian OS itself. He is a regular contributor of Series 60 documentation for Forum Nokia.