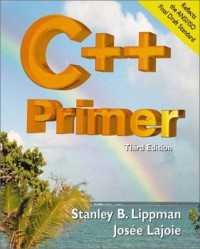 Quite a few changes have occurred between the second and third editions of C++ Primer. Most notably, C++ has undergone international standardization, which has not only added new features to the language, such as exception handling, run-time type identification, namespaces, a built-in Boolean data type, and a new cast notation, but has also extensively modified and extended existing features, such as templates, the class mechanism in support of both object-oriented and object-based programming, nested types, and overload function resolution. Perhaps of even more significance, an extensive library is now part of Standard C++, including what was previously referred to as the Standard Template Library, or STL. A new string type, a set of sequence and associative container types — such as vector, list, map, and set — and an extensible collection of generic algorithms to operate on those types are all features of this new standard library. There’s not only quite a lot of new material to cover but also new ways to think about how we program in C++. In short, not only has C++ been, in effect, newly invented, but so has the C++ Primer for this, its third edition.
C++ Primer provides a comprehensive introduction to the International Standard on C++. It is a primer in the sense that it provides a consciously tutorial approach to describing the C++ language. (It is not a primer in the sense of providing a simplistic or "gentle" description of the language.) Programming aspects of the language, such as exception handling, the container types, object-oriented programming, and so on, are presented in the context of solving a particular problem or programming task. Language rules, such as the resolution of an overloaded function call or the type conversions supported under object-oriented programming, are given extensive treatment that may initially seem out of place in a primer. We believe that the coverage is necessary to a practical understanding of the language, and we view the material as something one goes back to rather than digests at one sitting. If you find it initially overwhelming or simply too dry, put this material aside until later — we identify such sections with a special icon in the text.
Highlights

Clear, practical and example-driven coverage of the Standard Library, with emphasis on the containers, iterators and algorithms (also known as the Standard Template Library), the string class and iostreams
A detailed look at the new features of Standard C++; exception handling, run-time type identification, namespaces, the built-in bool type, and new-style cast-notation, with advice on how to effectively use them.
A thorough introduction of the advanced language features, such as templates, classes, and inheritance in support of generic programming, object-oriented programming and object-based programming.
An appendix that can be used as a quick reference for the generic algorithms, describing their behavior, and providing concrete examples of how to use them.

About the AuthorStanley B. Lippman is Architect with the Visual C++ development team at Microsoft. Previously, he served as a Distinguished Consultant at the Jet Propulsion Laboratories (JPL). Stan spent more than twelve years at Bell Laboratories, where he worked with Bjarne Stroustrup on the original C++ implementation and the Foundation research project. After Bell Laboratories, Stan worked at Disney Feature Animation, originally as principal software engineer, then as software technical director on Fantasia 2000.
Josée Lajoie is a staff development analyst in the IBM Canada Laboratory C/C++ Compiler group, and is currently the chair of the core language working group for the ANSI/ISO C++ Standard Committee. In addition, she is a regular columnist on the evolution of the C++ Language Standard for the C++ Report..