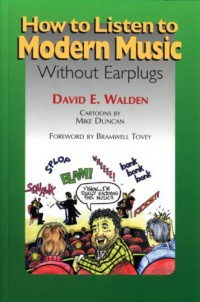 Book: How to Listen to Modern Music: Without Earplugs

The story goes that the legendary English conductor Sir Thomas Beecham was asked if he had conducted any music by Stockhausen. The reply came, "No, but I once trod in some."  Like all genuinely serious subjects, modern music is ripe for humour. Musicians everywhere have stories to tell about the strange and bizzare things they are asked to do by composers. Nobody is more amusing about music than musicians – witness this book, which incidentally, you should buy, as you are being eyed by a store detective who fully expects you to walk away with it. Why? Anyone interested in modern music arouses suspicions.  A favourite anecdote of mine concerns the trumpeter in the BBC Symphony Orchestra in London, England, who embarking one day upon yet another contemporary work, said in a drawling London dialect "What was this piece called last time we played it?"  In Winnipeg, at an orchestral rehearsal for the first du Maurier New Music Festival in 1992, one of the musicians asked "Maestro, do you really like this stuff?" As a matter of fact, I do. I have always been intrigued, challenged, extended, fortified and seduced by the best in modernity.   I belong to that category of musician that does not really care if the audience likes it or not. Of course, if you believe that, you’ll believe anything.   But if the truth be told, I have often been amused, annoyed, infuriated, baffled and astonished by many composers and their music.   At The Winnipeg Symphony Orchestra’s du Maurier New Music Festival Canadian Composers Competition (a title that’s eluded many a radio announcer – and from 2000 it will be even longer: The Winnipeg Symphony Orchestra’s Centara Corporation New Music Festival with the major support of Investor’s Group, Canadian Composer’s Competition) we made it a house rule that composers were never to be given the microphone in front of the live audience unless they were being interviewed. That way they could be interrupted legitimately. How many of us have been to a new music event and listened to acomposer trudging through a barely abbreviated version of a doctoral thesis (complete with verbose technicalities) that sounds as if the music had been through some kind of committee process before arriving on the platform?  No, that won’t do.  There is a very good English word for such an activity. Unfortunately, it is falling out of use because of more picturesque associations – humbuggery. My Chambers Dictionary defines ‘humbugger’ as "hollowness,