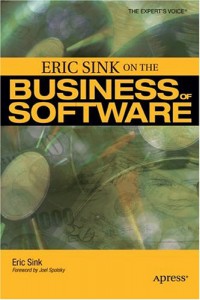 Book: Eric Sink on the Business of Software

Even my founding of SourceGear was mostly unintentional. I quit my job at Spyglass and created a company that I never intended to grow. I merely wanted to work solo as a programmer doing projects on contract. Nine years later I find myself working in a real company with employees and a phone system. Everything that happened between then and now is a bit of a blur.But clearly a lot of things are different now. These days it seems like every programmer wants to start his own company. What changed? I believe there has been a fundamental shift that can be traced to just two core issues. In a nutshell, the blame for this trend can be placed squarely on the shoulders of Scott Adams and Al Gore.Scott Adams changed everything with his daily comic strip. Remember the Pointy-Haired Boss from Dilbert? The guy who thinks his laptop will weigh less if he deletes some files? Prior to the Dilbert comic strip, millions of programmers in the United States believed they somehow ended up working for the only clueless software manager in the industry. Thanks to Scott Adams, now we know that virtually all of us work for pointy-haired bosses. Millions of programmers are stuck in work environments that seem to be perfectly designed to prevent them from creating software. We want to start our own company simply so we can get some work done.And Al Gore made it all possible when he invented the Internet. Starting a software company is a lot easier now that we can just pump the bits out the T1 line. You see, the reason we talk about “shipping” software products is that in the old days we actually had to ship software products. People gave us money, and we sent our software to them on CD or floppy disk. Nowadays, physical shipping is rarely needed. When I sell software, I just send out a string of bytes over the Internet. The whole thing feels so virtual. Maybe those bytes are the result of years of effort by our programmers. Or maybe I am simply the first person to notice that if you rip an MP3 from the Beatles’ “White Album” and reverse the bytes, you get a version control system.About The AuthorEric Sink graduated in 1990 from the University of Illinois with a degree in computer science. After living for a year in Spain, he spent five years at Spyglass, where he led the group that developed the Web browser later to become known as Internet Explorer. In 1997, Eric left Spyglass and founded SourceGear, which is now a leading vendor of version control tools. In 2002, SourceGear was honored by Inc. magazine as one of the 500 fastest-growing private companies in America.