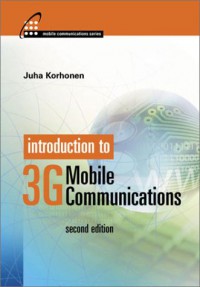 The third generation (3G) mobile communication system is the next big thing in the world of mobile telecommunications. The first generation included analog mobile phones [e.g., Total Access Communications Systems (TACS), Nordic Mobile Telephone (NMT), and Advanced Mobile Phone Service (AMPS)], and the second generation (2G) included digital mobile phones [e.g., global system for mobile communications (GSM), personal digital cellular (PDC), and digital AMPS (D-AMPS)]. The 3G will bring digital multimedia handsets with high data transmission rates, capable of providing much more than basic voice calls.This book was written to provide the reader with an information source that explains the principles and the basic concepts of the most important of the 3G telecommunications systems—universal mobile telecommunication system (UMTS) or Third Generation Partnership Project (3GPP)—in an easily understandable form. Some comparative information on the other 3G systems (the most important of which is CDMA2000) appears in the early sections of the text, but the UMTS/3GPP version of 3G is the largest and most important of the 3G initiatives, and it is the primary subject of the book. All the significant 3G versions serve to protect their corresponding 2G system investments. Since UMTS/3GPP is a GSM extension, and 2G is mostly about GSM [not code-division multiple access (CDMA) or timedivision multiple access (TDMA)], UMTS plays a key role in 3G.Numerous research papers and technical specifications about 3G are available, but these are generally quite difficult to understand, especially if the reader does not have substantial experience in telecommunications engineering. A typical specification contains exact rules on how a certain technical feature should be implemented. It does not explain why it is implemented in a certain way, nor does it tell us how this feature fits into the big picture, that is, into the entire 3G system. In this book I have deciphered that information, added my own analysis about the subject, and provided it to the reader in plain English. The result is an entry-level introduction to 3G, with an emphasis on the 3GPP-specified frequency division duplex (FDD) mode system, which will most probably be the most widely used 3G system.It is not the intention of this book to go into great detail. 3G is a broad subject, and it would be impossible to provide a detailed analysis of every aspect in one volume. Instead, the basics are discussed and references to other information sources are provided so that interested readers can study specific subjects in more depth if they so wish. The Internet is also a very good source of information where telecommunications is concerned, and the references include appropriate Web site addresses.