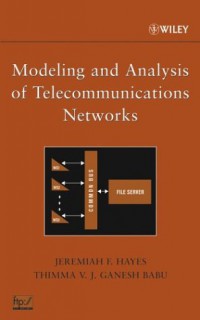 A timely and relevant analysis of today’s complex call models In today’s world of ever-expanding telecommunications options, here is an advanced-level text that covers the mathematical methods used in the analysis of modern telecom networks, with emphasis on a variety of call models such as quality of service (QoS) in packet-switched Internet Protocol (IP) networks, Asynchronous Transfer Mode (ATM), and Time Division Multiplexing (TDM). The authors move from basic principles to complex concepts and outline the fundamental steps toward modeling and analyzing each system. Illustrative numerical examples are carried out using three computational tools, Excel, Matlab®, and Maple.
Refined and class tested for more than five years, Modeling and Analysis of Telecommunications Networks will benefit telecom researchers, students, and professionals alike, with thorough coverage that includes:

About the Author JEREMIAH F. HAYES, PhD, received his PhD in Electrical Engineering from the University of California, Berkeley, in 1966. Dr. Hayes is recently retired as Distinguished Emeritus Professor of Electrical and Computer Engineering at Concordia University. He has held visiting positions at several institutions, including the Jet Propulsion Laboratory, IBM Zurich Research Laboratory, Bell Communications Research, Bell Northern Research, University College, Cork, and the University of Canterbury. In recognition of his contributions, Dr. Hayes was raised to the rank of Fellow of the IEEE in 1983. In 1996, he was the fourth recipient of the Canadian Award in Telecommunications Research.
THIMMA V. J. GANESH BABU, PhD, received his PhD in Electrical and Computer Engineering from Concordia University, Montreal, Quebec, Canada, in 2001. He has been a Member of Technical Staff at EMS Technologies, Montreal, Quebec. He is a telecommunications consultant and part-time professor of Electrical and Computer Engineering at Concordia University.