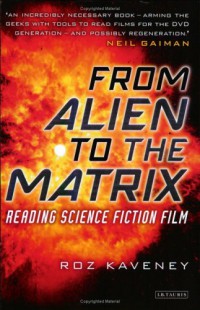 Book: From Alien To The Matrix: Reading Science Fiction Film

Publisher: I. B. Tauris

‘I really enjoyed From Alien to The Matrix, it seemed like an incredibly necessary book – arming the geeks with tools to read films for the DVD generation – and possibly regeneration. Clear, simple text, in which an understanding of slash fiction is as important to the text as an encyclopaedic knowledge of a hundred years of written SF and what movies mean.’
Neil Gaiman
‘Roz Kaveney is the ideal guide to the contemporary SF landscape. She knows how to look at movies; she knows which movies to look at, and she has both an unerring eye for what is significant about everything she looks at and a prose style more than equal to the task of conveying sometimes complex ideas with clarity and wit. Her analyses of major franchises like The Terminator, The Matrix and (particularly) the Alien cycle are exemplary in their piercing perceptiveness, but From Alien to The Matrix brings the same acuity of vision to less obvious but equally vital movies like Small Soldiers, Strange Days and Galaxy Quest.’
Charles Shaar-Murray
‘From Alien to The Matrix is a terrific book. The author successfully redresses the unbalanced nature of popular culture and genre criticism in the field of science fiction. She overturns the theory (still widely held) that it is a debased genre and unworthy of serious critical study, while not wholly subscribing to the postmodern reaction that all popular culture is worthy of attention because it is “popular”. Well-chosen examples of genre films and associated aspects allow her to explore in considerable depth the text as well as the effects of the work on other genres. Above all, the author avoids the academic aridity of similar works by a combination of persuasive prose, massive erudition and unashamed passion. She actually likes this stuff and is unafraid to say so. She is also discerning enough to tell good genre work from bad – which is not as easy as many commentators think.’
Neil Norman