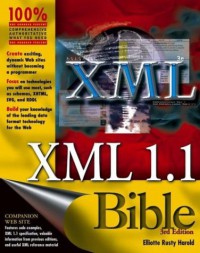 If XML can do it, you can do it too …
If you’re a Web developer, you’ve seen XML rocket to first place as the preferred data format for everything from stock trades to graphic design. In this tightly focused, fully updated guidebook, a top XML authority gives you a complete education in the technology. You’ll learn to write documents in XML, validate them against DTDs and schemas, format them with CSS and XSL style sheets, and take advantage of their versatility. This book helps you to create top-flight Web sites without becoming a professional programmer.
Inside, you’ll find complete coverage of XML

Discover how semantic tagging makes XML documents easier to maintain and develop than their HTML counterparts
Post XML documents on Web servers in a form all users can read
Use style sheets to convert XML to HTML for legacy browsers
Include international characters in your documents, and merge different XML vocabularies with namespaces
Build large documents from smaller parts using entities and Xinclude, and connect documents with XLinks and XPointers
Gain a complete understanding of both CSS and XSL and how each is used with XML
Explore practical applications of XML in Scalable Vector Graphics (SVG), XHTML, RDDL, and the new application developed for genealogical data

About the Author Elliotte Rusty Harold is an internationally respected writer, programmer, and educator, both on the Internet and off. He got his start writing FAQ lists for the Macintosh newsgroups on Usenet and has since branched out into books, Web sites, and newsletters. He’s an adjunct professor of computer science at Polytechnic University in Brooklyn, New York. His Cafe con Leche Web site at http://www.cafeconleche.org/ has become one of the most popular independent XML sites on the Internet. Elliotte is originally from New Orleans, to which he returns periodically in search of a decent bowl of gumbo. However, he currently resides in the Prospect Heights neighborhood of Brooklyn with his wife Beth, and his cats Charm (named after the quark) and Marjorie (named after his mother-in-law). When not writing books, he enjoys working on genealogy, mathematics, free software, and quantum mechanics. His previous books include The Java Developer’s Resource, Java Network Programming, Java Secrets, JavaBeans, Java I/O, XML: Extensible Markup Language, XML in a Nutshell, Processing XML with Java, and Effective XML.