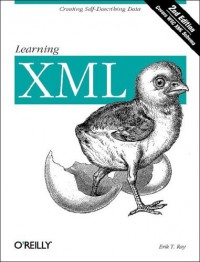 In this new edition of the best selling title, the author explains the important and relevant XML technologies and their capabilities clearly and succinctly with plenty of real-life projects and useful examples. He outlines the elements of markup–demystifying concepts such as attributes, entities, and namespaces–and provides enough depth and examples to get started. Learning XML is a reliable source for anyone who needs to know XML, but doesn’t want to waste time wading through hundreds of web sites or 800 pages of bloated text.
Since its introduction in the late 90s, Extensible Markup Language (XML) has unleashed a torrent of new acronyms, standards, and rules that have left some in the Internet community wondering whether it is all really necessary. After all, HTML has been around for years and has fostered the creation of an entirely new economy and culture, so why change a good thing? XML isn’t here to replace what’s already on the Web, but to create a more solid and flexible foundation. It’s an unprecedented effort by a consortium of organizations and companies to create an information framework for the 21st century that HTML only hinted at.
To understand the magnitude of this effort, we need to clear away some myths. First, in spite of its name, XML is not a markup language; rather, it’s a toolkit for creating, shaping, and using markup languages. This fact also takes care of the second misconception, that XML will replace HTML. Actually, HTML is taking advantage of XML by becoming a cleaner version of itself, called XHTML. And that’s just the beginning. XML will make it possible to create hundreds of new markup languages to cover every application and document type.
The standards process will figure prominently in the growth of this information revolution. XML itself is an attempt to rein in the uncontrolled development of competing technologies and proprietary languages that threatens to splinter the Web. XML creates a playground where structured information can play nicely with applications, maximizing accessibility without sacrificing richness of expression.
XML’s enthusiastic acceptance by the Internet community has opened the door for many sister standards. XML’s new playmates include stylesheets for display and transformation, strong methods for linking resources, tools for data manipulation and querying, error checking and structure enforcement tools, and a plethora of development environments. As a result of these new applications, XML is assured a long and fruitful career as the structured information toolkit of choice.
Of course, XML is still young, and many of its siblings aren’t quite out of the playpen yet. Many XML specifications are mere speculation about how best to solve problems. Nevertheless, it’s always good to get into the game as early as possible rather than be taken by surprise later. If you’re at all involved in information management or web development, then you need to know about XML.
This book is intended to give you a birds-eye view of the XML landscape that is now taking shape. To get the most out of this book, you should have some familiarity with structured markup, such as HTML or TEX, and with World Wide Web concepts such as hypertext linking and data representation. You don’t need to be a developer to understand XML concepts, however. We’ll concentrate on the theory and practice of document authoring without going into much detail about writing applications or acquiring software tools. The intricacies of programming for XML are left to other books, while the rapid changes in the industry ensure that we could never hope to keep up with the latest XML software. Nevertheless, the information presented here will give you a decent starting point for jumping in any direction you want to go with XML.