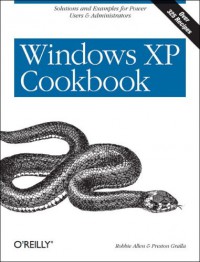 Each year, Windows XP is pre-installed on 30 million PCs sold in the U.S.–and 90 million worldwide–making it the world’s most popular operating system, and proving to frustrated users everywhere that preponderance does not equate to ease of use. There are literally thousands of programs, tools, commands, screens, scripts, buttons, tabs, applets, menus, and settings contained within Windows XP. And it has only been in the last couple of years that Microsoft’s documentation has actually been more of a help than a hindrance. But it still isn’t enough.
Windows XP users and administrators need a quick and easy way to find answers. Plenty of books go into detail about the theory behind a particular technology or application, but few go straight to the essentials for getting the job done. Windows XP Cookbook does just that, tackling the most common tasks needed to install, manage, and support Windows XP.
Featuring a new twist to O’Reilly’s proven Cookbook formula, this problem-solving guide offers multiple solutions for each of its 300-plus recipes. Solve dilemmas with the graphical user interface, the command line, through the Registry, or by using scripts. Each step-by-step recipe includes a discussion that explains how and why it works. The book is also among the first to cover Microsoft’s XP Service Pack 2. With these practical, on-the-job solutions, Windows XP Cookbook will save you hours of time searching for answers.
Windows XP Cookbook will be useful to anyone that has to use, deploy, administer, or automate Windows XP. But this isn’t a typical end-user book; it covers the spectrum of topics involved with running Windows XP in both small and large environments. As a result, IT professionals and system administrators will find it a great day-to-day reference. And power users will find Windows XP Cookbook a great source for information on tweaking XP and getting the most out of their systems. The bottom line is that Windows XP Cookbook will make just about anyone who uses XP more productive.