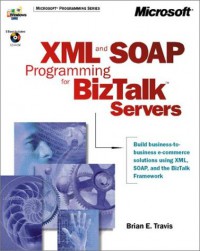 The eXtensible Markup Language, or XML, is a simple technology that has taken the computer world by storm. Even before XML was formally adopted, Microsoft Chairman Bill Gates called XML a "breakthrough technology" because he saw the value of defining data transactions in an open, platform-independent way. Since then, many standards of data interchange have been built on top of XML, each with a particular purpose and all using XML’s simple syntax.
BizTalk and the Simple Object Access Protocol (SOAP) are XML-based, open initiatives designed to facilitate electronic commerce between systems on the Web. Both BizTalk and SOAP use XML as their data exchange syntax, because XML enables you to specify data in a very precise way.
I’ve wanted to write an XML book for some time. My book, The SGML Implementation Guide (Springer Verlag, 1995), was a real-world hands-on guide to implementers of SGML in the mid-1990s. When XML came along, I wanted to update my first book to make it XML-compatible. This was difficult, however. Because of its simplicity, flexibility, and much smaller size, XML can do so much more than SGML. Any book that I wrote would have to be XML-specific.