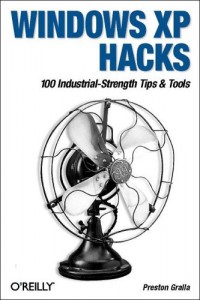 Now power users can rejoice! Windows XP Hacks offers tips, tools, and know-how to bend Windows XP to your will. The book delves into XP topics such as controlling the control panel, changing unchangeable icons, removing uninstallable XP components, stopping pop-up ads, taking a bite out of cookies, speeding up file downloads, protecting yourself with firewalls and proxy servers, and more. Users of both Windows XP Home Edition and Windows XP Pro Edition will find smart, timesaving, fun, and useful hacks for virtually every feature in their operating system. Even if you’re not a power user yet, this book will have you well on your way.
Windows XP marks the biggest change to the Windows OS since the advent of Windows 95. It combines the stability of the NT/2000 operating system with the user-friendliness and hardware support of the consumer Windows line—and it does so literally, because those two operating systems have been combined for the first time in XP. Although there are two versions of XP—Home Edition and Professional Edition—the differences between them are relatively minor and have to do primarily with security and administrator tools. Under the hood, they’re the same OS.
XP marks several other change as well. DOS is no longer a part of the underlying OS, although it’s still available as a command prompt. Multimedia and graphics have been built into the operating system more directly than before and are no longer treated as an afterthought. And, cosmetically, XP has been given a makeover, in both the way it looks (rounded windows and almost cartoonish at times) and the way it works.