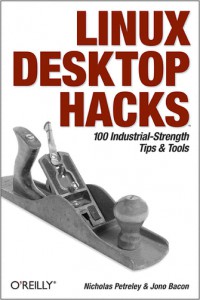 With hacks that any user can follow, Linux Desktop Hacks demonstrates how easy it is to modify Linux to suit your desires. The book is packed with tips on customizing and improving the interface, boosting performance, administering your desktop, and generally making the most out of what X, KDE, Gnome, and the console have to offer.
The Linux desktop has come a long way. I know. I’ve been using Linux as my default desktop work environment for so long I feel like I’ve experienced almost the entire evolution of the Linux desktop firsthand. I’m guessing it was sometime shortly after 1995 when I started using Linux on the desktop for more than 90% of my work. Linux not only outperformed Windows 95 on my Everex 486 DX2-66, but it also spared me the three R s that plagued every version of Windows: Reboot, Reformat, and Reinstall. I never had to reboot or reinstall anything to solve a Linux problem. That was enough to solidify my determination to use Linux in spite of its aesthetic flaws.
On the down side, I had to tolerate very spotty hardware support, especially for display and sound cards. Once I had a graphical desktop running, the fonts were hideous. To its credit, Linux let me choose from dozens of window managers. Unfortunately, only a few of them ran reliably, and the user interface on most of them made little sense to someone like me, who was used to OS/2 and Windows. On the other hand, I was immediately spoiled by the fact that almost all Linux window managers let you switch between virtual desktops instantaneously (virtual desktops are separate, distinct desktop workspaces). Windows-based attempts at mimicking this feature were pitiful by comparison. Only a small number of productivity applications were available back then, and few of them were GUI-based. But even then, Linux came with more than enough software to meet my needs. Eventually, I learned it was possible to improve the early Linux desktop experience to make it border on pleasant, but I couldn’t do it without becoming proficient at editing an endless list of obscure, text-based configuration files.