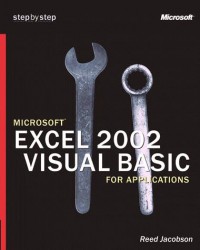 Microsoft Excel is a powerful tool for analyzing and presenting information. One of the strengths of Excel has always been its macro language. Since Excel first appeared, it has always had the most extensive and flexible macro language of any spreadsheet program. Visual Basic for Applications (VBA) first appeared as part of Excel in version 5. In fact, Excel was the first major application to include this exciting new architecture. Starting with Excel 97, VBA became a complete development environment, consistent with the stand- alone version of Visual Basic and shared by all Microsoft Office applications.
When you first start writing macros in Excel, you need to learn two different skills. First, you need to learn how to work with VBA. Everything you learn about VBA will be true not only for Excel, but also for other applications that incorporate VBA. Second, you need to learn how to control Excel. The more you know about Excel as a spreadsheet application, the more effective you can be at developing macros that control Excel. While this book focuses on VBA as Excel’s development environment, much of what you will learn will help you be more effective using spreadsheets as well.
Microsoft Excel 2002 Visual Basic for Applications Step By Step walks you through tasks one at a time, keeping you on track with clear instructions and frequent pictures of what you should see on your screen. In each section, you’ll become familiar with another important aspect of Excel or VBA.
You’ll notice some changes as soon as you start Microsoft Excel 2002. The toolbars and menu bar have a new look, and there’s a new task pane on the right side of your screen. But the features that are new or greatly improved in this version of Excel go beyond just changes in appearance. Some changes won’t be apparent to you until you start using the program.