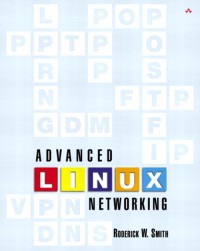 With an increasing number of networks and mission-critical applications running on Linux, system and network administrators must be able to do more than set up a server and rely on its default configuration. Advanced Linux Networking is designed to help you achieve a higher level of competence. It focuses on powerful techniques and features of Linux networking and provides you with the know-how you need to improve server efficiency, enhance security, and adapt to new requirements.
This book begins with a brief introduction to low-level configuration, including a guide to getting your network up and running. Part II outlines those servers and procedures most likely to be used by the computers on your local network: DHCP servers, Kerberos, Samba, time servers, and network backups, among others. Part III covers Internet servers: DNS, SMTP (sendmail, Postfix, and Exim), Apache, and FTP servers. Part IV examines network security, exploring such topics as using a chroot jail, iptables configuration, and VPNs. Wherever pertinent, the author addresses the differences between Caldera OpenLinux, Debian GNU/Linux, Mandrake, Red Hat, Slackware, SuSE, and TurboLinux.
Specific topics covered include: